Nokia Suzume with Exynos 7884B, Android 12 spotted at Geekbench

Recent Nokia phones have mostly been using Qualcomm and MediaTek chipsets, with the occasional Unisoc poping up here or there. Now the first Nokia to be powered by an Exynos chipset may have been spotted on Geekbench.

The phone doesn’t have much RAM, 3 GB by the looks of it, but it did run full Android 12. Unfortunately, this is all the info we can gather from Geekbench. 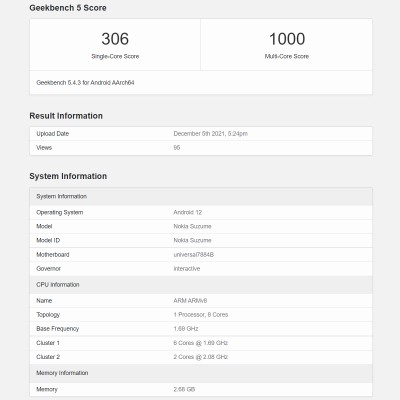 The Nokia Suzume (Japanese for sparrow) may be one of the four phones that leaked a couple of weeks ago. Two of them were Go Edition phones, so they are out of contention, but the other two looked like mid-range devices with triple cameras and notched LCDs. However, they are known only as N150DL and N153DL, so it’s not clear if the Suzume code name belongs to either one of them.