Civilians boarded buses out of the northeastern city of Sumy, where 21 people were killed in airstrikes overnight, while others took an unofficial escape route out of the bombarded Kyiv suburb of Irpin.

But Ukraine accused Russia of attacking an evacuation corridor out of the beleaguered southern port city of Mariupol, where aid workers said tens of thousands were living in “apocalyptic” conditions.

Kyiv has branded the Moscow-offered corridors from four cities a publicity stunt as many of the exit routes lead into Russia or its ally Belarus. Both sides accuse each other of ceasefire violations.

Western allies have imposed sweeping sanctions on Moscow and poured in weapons to Ukraine, while oil giant Shell became the latest among scores of businesses to pull out of Russia.

Ukrainian President Volodymyr Zelensky denounced what he called unkept promises by the West to protect his country, and renewed calls for a no-fly zone that leaders have so far dismissed.

“But the responsibility for that rests also on those who were not capable to take a decision in the West for 13 days,” he added. “On those who have not secured the Ukrainian skies from the Russian assassins.”

Despite the sound of nearby shelling in Irpin, seen as a critical point for Russia’s advance on Kyiv, civilians fled in icy wind and a thick snowfall, AFP reporters saw.

People waited in a long line to cross over the Irpin river on makeshift walkways of planks and mangled metal, after the Ukrainians blew up the bridge leading into the capital to hamper any Russian advance. 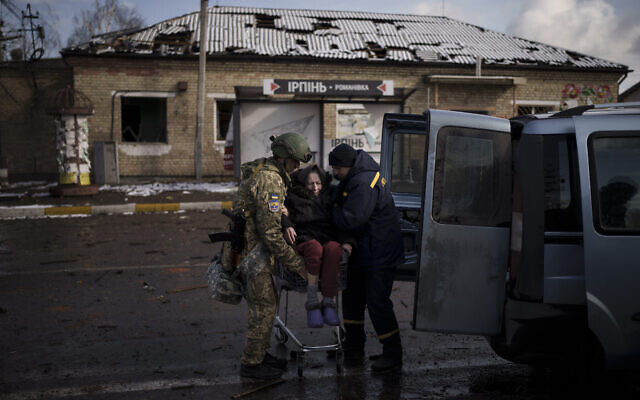 A Ukrainian soldier helps an elderly woman who was being evacuated on a shopping cart from Irpin, in the outskirts of Kyiv, Ukraine, March 8, 2022. (AP Photo/Felipe Dana)

“I didn’t want to leave, but there’s nobody left in the homes around us, no water, no gas and no electricity,” Larissa Prokopets, 43, told AFP.

She said she was leaving after several days spent “hiding in the basement” of her home, which kept “shaking” due to bombardment nearby.

Russia had refused calls for a humanitarian corridor in Irpin and the nearby suburbs of Bucha and Gostomel “although we had everything ready for this,” Ukrainian interior ministry official Anton Gerashchenko said.

Evacuations had however begun in Sumy, near the Russian border and 350 kilometers (218 miles) east of Kyiv, where Russia had formally declared a humanitarian corridor, officials said.

Dozens of buses had already left in the direction of Lokhvytsia, to the southwest, said the interim chief of the Poltava region, Dmitry Lunin. The corridor is designed to evacuate civilians, including Chinese, Indians and other foreigners, officials said. 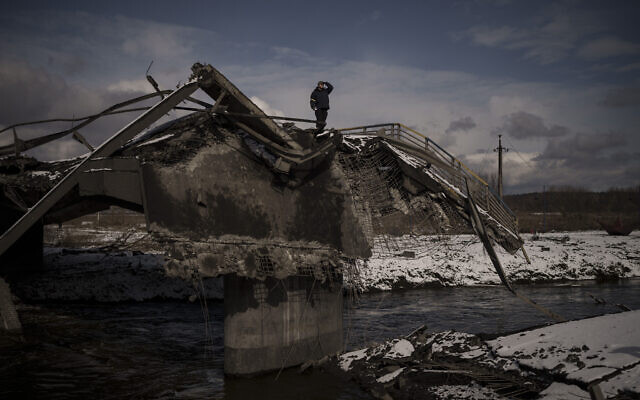 A man stands atop a destroyed bridge in Irpin, on the outskirts of Kyiv, Ukraine, March 8, 2022. (AP Photo/Felipe Dana)

Ukraine also accused Russia of violating a ceasefire around Mariupol on Tuesday, describing it as “nothing other than a genocide.”

“The enemy has launched an attack heading exactly at the humanitarian corridor,” the defense ministry said on Facebook, adding the Russian army “did not let children, women and elderly people leave the city.”

The International Committee of the Red Cross said Mariupol residents faced “atrocious” conditions and were running out of food, water and medical supplies.

“The bottom line today is that this situation is really apocalyptic for people,” ICRC head of media Ewan Watson said in Geneva.

Long lines of cars snaked out of the southern city of Mykolaiv, where sporadic shell fire could be heard.

“We’re leaving as soon as possible. There are attacks every day, it’s terrifying,” said Sabrina, 19, who had a dog on a lead and a cat in her jacket. She said she had no news from her husband who was on the frontline. 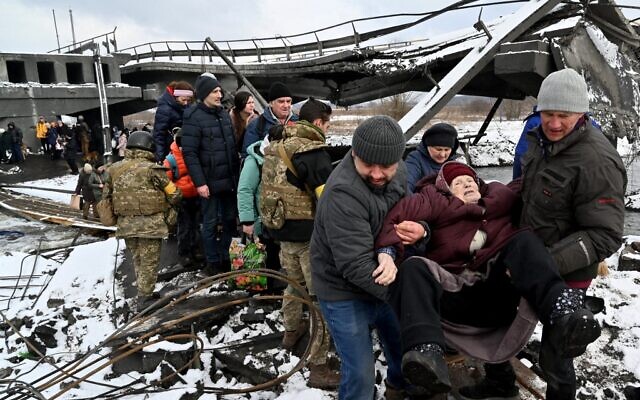 Ukrainian soldiers help an elderly woman to cross a destroyed bridge as she evacuates the city of Irpin, northwest of Kyiv, on March 8, 2022 (Sergei SUPINSKY / AFP)

Despite a slow start and a large Russian column being stalled outside Kyiv, Moscow’s forces have slowly advanced, particularly in the east and south.

Ukraine claimed on Sunday that around 11,000 Russian soldiers have been killed. So far, Russia has only admitted to the deaths of 498 Russian troops.

At least 406 civilians have died since the start of Russia’s assault on its ex-Soviet neighbor, according to the UN, although it believes the real figures to be “considerably higher.”

The onslaught has created a huge refugee crisis for European countries that have taken in Ukrainians fleeing the conflict, particularly Poland.

“It doesn’t stop,” Filippo Grandi, the UN High Commissioner for Refugees, said as he announced that two million people had fled.

A huge Western sanctions campaign has failed to dissuade Russia’s Putin from his invasion plan. 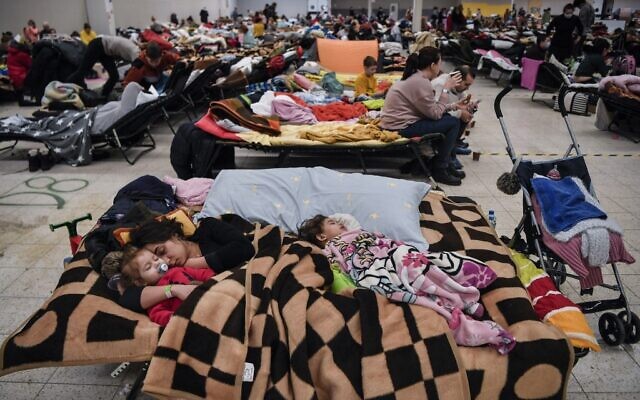 A mother sleeps with her children among many others in a temporary shelter hosting the Ukrainian refugees located in a former shopping center near the city of Przemysl, on March 8, 2022. (Louisa GOULIAMAKI / AFP)

Energy giant Shell said Tuesday it would withdraw from its involvement in Russian gas and oil, and apologized for buying a cargo of Russian crude last week.

Putin has equated sanctions with a declaration of war and put nuclear forces on alert. He has pledged the “denazification” of Ukraine and demands its “neutralization” and demilitarization.

US Secretary of State Antony Blinken said during a visit to NATO ally Estonia that Washington was “very much looking at” an energy embargo, while also trying to ease the impact on supplies.

The West has so far steered clear of the no-fly zone demanded by Zelensky, with Putin warning it would be considered as “participation in the conflict” with nuclear-armed Russia.