Biden looks at student loan forgiveness but not $50,000 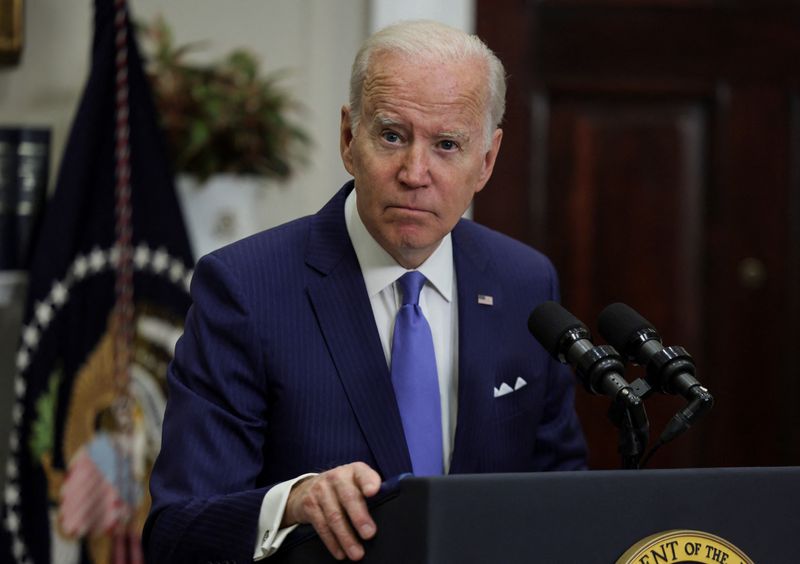 © Reuters. U.S. President Joe Biden announces additional military and humanitarian aid for Ukraine as well as fresh sanctions against Russia, during a speech in the Roosevelt Room at the White House in Washington, U.S., April 28, 2022. REUTERS/Evelyn Hockstein

By Steve Holland and Trevor Hunnicutt

WASHINGTON (Reuters) -U.S. President Joe Biden said on Thursday that he will make a decision on whether to forgive some federal student loan debt and announce his plans soon.

“I am considering dealing with some debt reduction,” Biden told reporters.

“I am not considering $50,000 debt reduction, but I’m in the process of taking a hard look at whether or not there will be additional debt forgiveness, and I’ll have an answer on that in the next couple of weeks.”

Student debt cancellation has become a priority for many liberals and one that could shore up popularity with younger and more highly educated voters, who lean Democratic, ahead of November’s critical midterm elections.

But the Biden administration has been reluctant to unilaterally make an unprecedented cancellation of college debt owned by the U.S. government, a move that would test his legal authority.

Instead, Biden has asked Congress to pass a bill forgiving debt that he could sign.

The federal government has let 43 million borrowers stop paying on a total of $1.6 trillion in student loans since the onset of the COVID-19 pandemic in 2020.