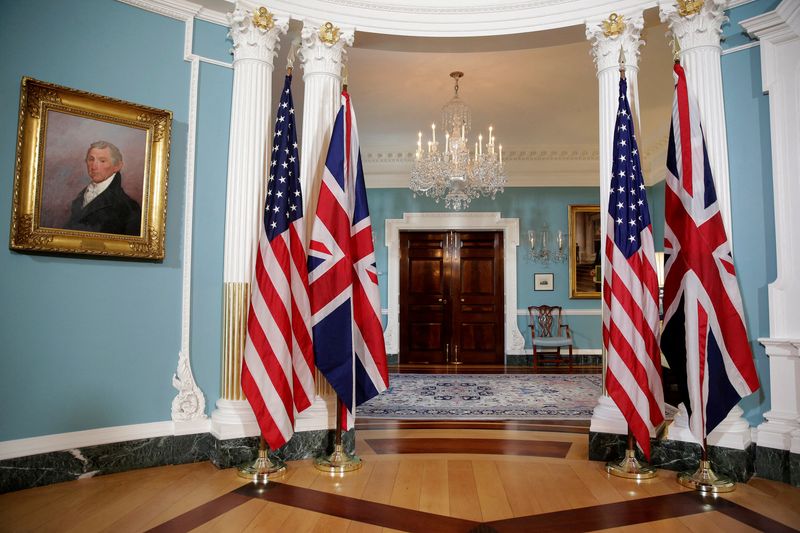 © Reuters. FILE PHOTO: The flags of the United States and the United Kingdom stand after bi-lateral photo between U.S. Secretary of State Rex Tillerson and British Foreign Minister Boris Johnson was cancelled at the State Department in Washington, U.S. March 22, 201

LONDON (Reuters) -Britain should move further and faster in reforming its financial rules to ‘reboot’ after Brexit and rethink the “anti-competitive” tax system on banks, top bankers and think-tanks said on Thursday.

Britain has already launched over 30 public consultations, including on reforming insurance rules on Thursday, to keep London a globally competitive financial centre after being largely cut off from the European Union due to Brexit.

“The debate has moved on from alignment with the EU in exchange for future access. Instead, the UK should focus on closer alignment and cooperation with the U.S. and with other markets around the world,” a joint report https://newfinancial.org/report-the-future-of-uk-banking-and-finance from New Financial in London and the Atlantic Council in Washington said.

Britain should focus on “low-hanging fruit” such as faster tweaking of inappropriate rules inherited from the EU, but be wary of going above and beyond standards implemented internationally, the report said.

Banks have welcomed draft reforms so far but want a faster pace given that many will need legislation, which takes time.

Richard Gnodde, CEO of Goldman Sachs (NYSE:) International, said he was not seeking a “bonfire of regulations” and Britain needed to look at how to be a global leader in new areas like crypto and carbon markets.

“Nothing is preordained. Those things are up for grabs. How do we secure them?” Gnodde said, adding that the new UK visa regime would help recruit top talent, but tax on banks needed a “lot of work”.

Anna Marie Dunn, EMEA CFO of JPMorgan (NYSE:) bank, added that tax on banks in Britain was higher than elsewhere, which is “anti-competitive” and puts off banks from having assets in the UK.

The think-tanks’ report said Britain’s capital markets have the potential to grow by up to 40% if it can close the gap with the United States, this equates to an additional $75 billion annually.

Britain’s financial services minister John Glen told a launch event for the report that he shared its ambition for closer U.S. ties as he brought in “sweeping reforms” to sharpen London’s competitiveness.

“There is a real opportunity for us to work together to shape the international financial services regulatory framework,” Glen said.

JPMorgan’s Dunn said there was an opportunity for Britain and the United States to define a better legal and regulatory framework for crypto to provide more transparency in a coordinated fashion.