U.S. FDA pushes ahead with move to ban menthol cigarettes 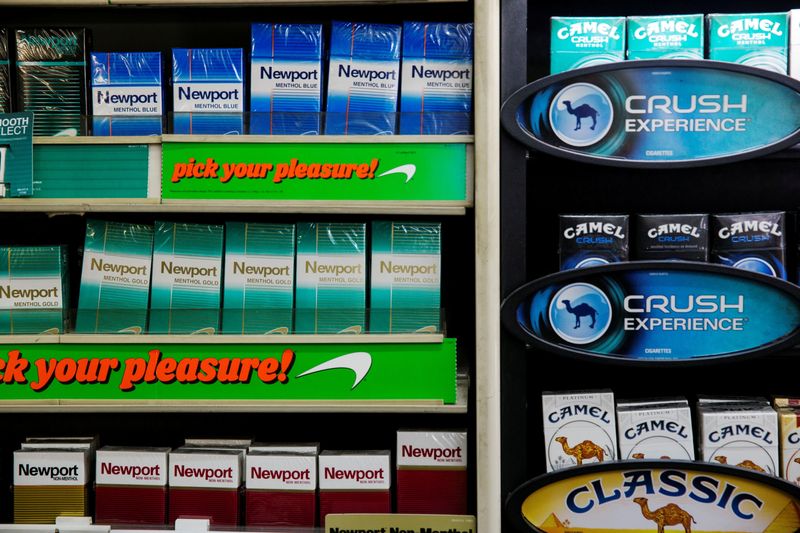 © Reuters. FILE PHOTO: Newport and Camel cigarettes are stacked on a shelf inside a tobacco store in New York July 11, 2014. REUTERS/Lucas Jackson/File Photo

(Reuters) -The U.S. Food and Drug Administration on Thursday issued a long-awaited proposal to ban menthol cigarettes and flavored cigars, a major victory for anti-smoking advocates but one that could dent sales at tobacco companies.

The proposal, which comes a year after the agency announced the plan, still needs to be finalized and can take years to implement as it is likely to face stiff opposition from Big Tobacco.

For decades, menthol cigarettes have been in the crosshairs of anti-smoking groups who have argued that they contribute to disproportionate health burdens on Black communities and play a role in luring young people into smoking.

Menthol cigarettes, banned in many states including California and Massachusetts, account for more than a third of the industry’s overall market share in the United States, even as overall smoking rates have been declining in the country.

In 2019, there were more than 18.5 million menthol cigarette smokers ages 12 and older in the country, with particularly high rates of use by youth, young adults, and African American and other racial and ethnic groups, the agency said.

“We believe harm reduction, not prohibition, is the better path forward,” Altria said in a statement.

“Taking these products out of the legal marketplace will push them into unregulated, criminal markets that don’t follow any regulations and ignore minimum age laws.”

BAT (LON:) and Imperial did not immediately respond to requests for comment.

The FDA said the public can submit their comments on the rule through July 5 from May 5, and it will decide whether to issue a final ruling after reviewing them.