People on Twitter have been going ape over the past week on speculation that Yuga Labs, creator of Bored Ape Yacht Club (BAYC), is launching its metaverse, the Otherside, at the end of the month. Well, it’s official: The Otherside is scheduled to drop tonight at 9:00 PM ET.

To get in on this much-anticipated metaverse and mint Otherside NFTs requires purchasing ApeCoin ($APE), the governance and utility token for the entire Ape ecosystem, and the legal tender in this new, exclusive metaverse. While crypto markets have been in the red over the past week, the price of $APE has been going green in anticipation of BAYC’s metaverse (as the saying goes, the grass is always greener on the otherside). Consider the market performance of the top 25 coins over the past week: 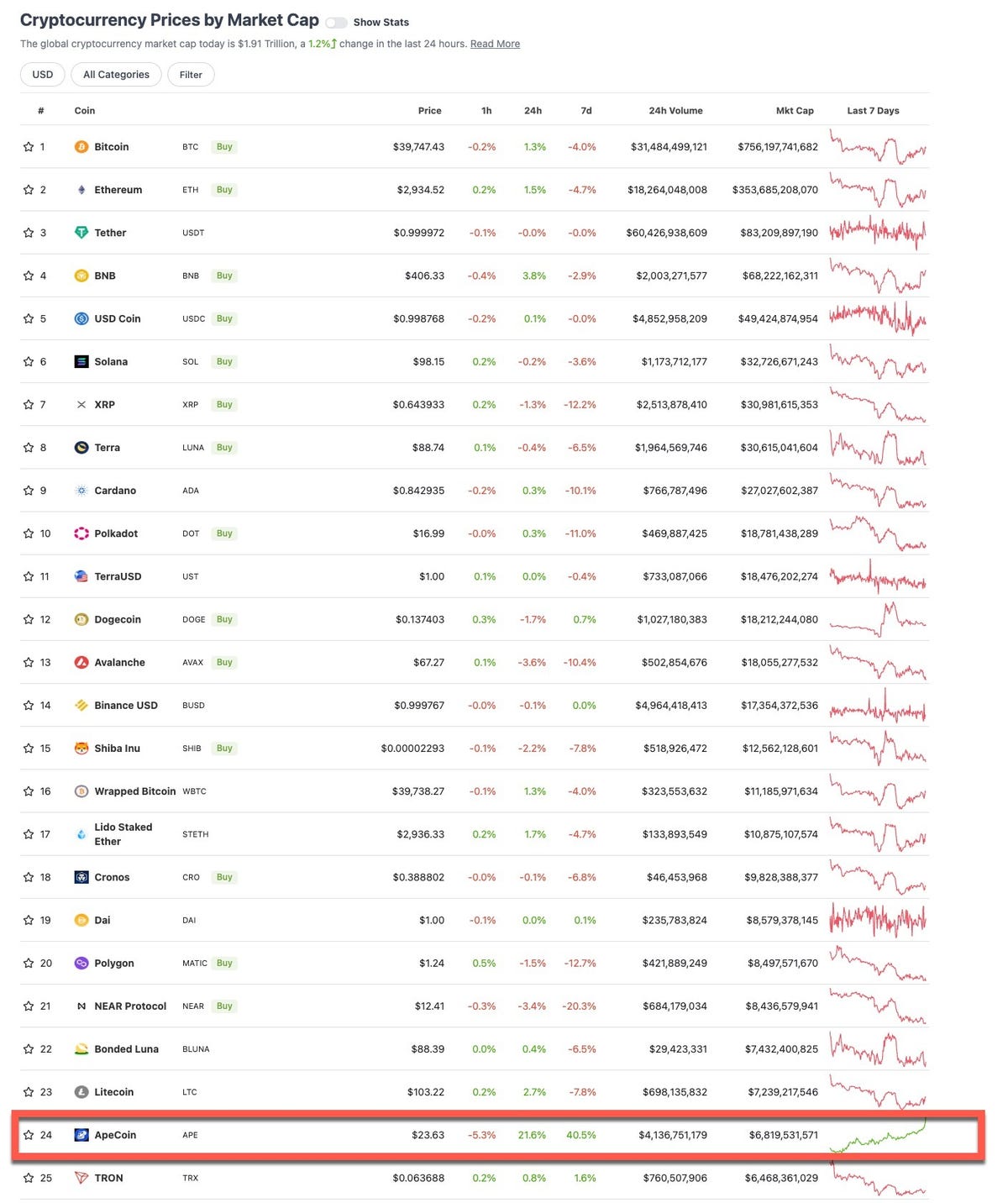 As of late Thursday, the price of $APE was $27.44, up 150% since April 18, when rumors first spread on social media that owners of NFTs from BAYC and Mutant Ape Yacht Club (MAYC) collections could get virtual land on the Otherside (the price has retreated to $23.68 as of 9:00 AM on April 30). But for those eager to stake a claim in this new metaverse, there’s more to it than just buying ApeCoins…a lot more.

Also: The metaverse is coming, but so are all these security problems

What you need to know before you go $APE

Launched in April 2021, the Bored Ape Yacht Club is one of the most popular — and arguably highly coveted — NFT collections available, consisting of 10,000 unique Bored Ape NFTs; unique digital collectibles that reside on the Ethereum blockchain. For example, a single Bored Ape has a floor price of 152.4 Ethereum coins, or ETH (roughly $431,000). 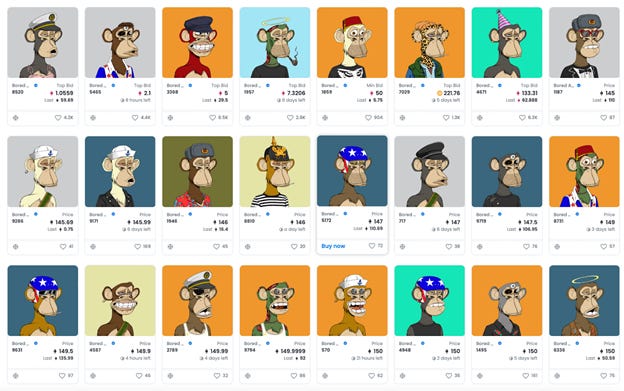 Over the past year, the craze (or hype) of Bored Ape has intensified throughout the NFT community as celebrities such as Colin Kaepernick, Shaquille O’ Neal and Snoop Dogg, and companies including Adidas, Google and Samsung, have added a quality of exclusivity akin to a swanky LA night club. And speaking of clubs, ownership of a Bored Ape doubles as a membership card to the Bored Ape Yacht Club and gives you access to “members-only benefits”, many of which are undisclosed but include access to a private discord server, NFT collectibles that are airdropped and exclusive games. Community strength, celebrity endorsement and exclusive utility are the three pillars that have made BAYC one of the strongest crypto cliques in the ether. The only thing missing is its own metaverse…until now.

“Investing in Ape Coin could be a diamond in the rough,” says Steven Warren, contributing writer and ZDNet‘s Crypto Coach, who’s also an avid collector of NFTs. “But keep in mind that it’s a speculative asset – with wild price fluctuations — and you should invest only with money that you can afford to lose.”

Recently, there’s been a large breakout of FOMO throughout the crypto universe among those eager to break on through to the Otherside, mainly from people who missed the April 1 deadline to be cleared under Know Your Customer guidelines. KYC, as it’s known is a standard validation process in the crypto community used to verify the identity of a customer, their risk and financial profiles. It verifies that you are who you say you are. If you’re one of those whose case of FOMO is driving you bananas, take a break and know that unless you pre-registered before April 1 and have been cleared under KYC, there’s no way to participate in this weekend’s NFT mint.

Up until late evening on April 28, the upcoming mint was to be in the form of a Dutch auction, whereby the price of $APE would drop over time. But before the powers-that-be could tweet a starting price for the auction, they determined that Dutch auctions are bull and have abandoned that approach in favor of making Otherdeeds a flat price of 305 ApeCoins (about $7,222, based on $APE’s April 30 price of $23.68). In addition, given demand from the NFT community, BAYC has allotted more time for users to set pre-approval for ApeCoin, which started at 9:00 AM this morning. That means the sale will start 12 hours later at 9:00 PM ET, Saturday night.

There are several rules and guidelines Ape coin holders must keep in mind for opening day. According to Othersides’s official Twitter page @OthersideMeta:

As the hours get closer to sale time, changes are still being made. To keep abreast of any updates, visit the official Twitter page @OthersideMeta.

The excitement and anticipation of minting NFTs in this new metaverse is bound to be a magnet for hackers and thieves. To prevent the risk of being hacked, Otherside’s official Twitter page wants you to keep these safety tips in mind:

How to purchase ApeCoin 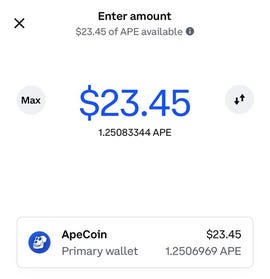 You may not be able to buy $APE for peanuts — the price is $23.68 a coin as of 9:00 AM this morning — but you can still buy it (you just can’t use it to mint NFTs in this weekend’s sale unless you’re KYC-cleared). “No problem,” says Warren, “you can still buy into the Ape metaverse on the secondary market.”

For those who are interested in buying $APE, you can do it in five steps. To illustrate, we’ll use Crypto Coach Warren’s following example, in which he purchased ApeCoin using the Coinbase app on his mobile phone. Upon logging in the Coinbase App:

Once you’ve got your coins in your account, you have the option to either store them in a hot wallet (in this example, online in a Coinbase wallet) or move it to a cold wallet (a separate, physical storage device that’s offline where online hackers can’t get to it).

Because $APE is an ERC-20 coin — a technical standard that enables interoperability between Ethereum-based coins — it’s possible to transfer it to another Ethereum address for storage. In Warren’s example, he’s able to take his $APE and transfer it to his cold wallet and store the funds. To do so, simply type “send” and enter the amount to send. Warren says to make sure to add a bit more for gas fees.

The $APE has been stored successfully in the hardware wallet. This is how the transaction looks from a tax perspective:

Gas fees do eat into a portion of the purchase; that is why it’s important to send a larger amount, or wait until gas fees are cheaper when moving funds from Coinbase to your hardware wallet, Warren notes. Warren’s example, is just that, an example. In all practicality, nobody would ever accept 61% in gas fees. “I ate the gas fees for the post. In reality if they are too high you should wait for gas fees to come down,” he says.

Special thank you to Steven Warren for contributing to this article. You can read Steven’s Crypto Coach column on ZDNet and his blog Everything Crypto.