In his first NHL playoffs in 2016-17, Connor McDavid was OK by normal NHL player standards, but in a scoring and two-way drought according to his own.

Six years later in these 2022 playoffs McDavid is now a playoff tsunami, an unstoppable force at even strength so far. He’s killing it on the attack and crushing it in his own zone. He’s at last become at least as good in crucible of the playoffs as he has always been in the lighter-checking regular season.

It’s not complicated to grasp how McDavid has transformed his two-way game. He’s become far more dedicated and aware in the d-zone, far more likely to get back and smartly cover off the defensive slot, then help the d-men advance the puck out of the zone. He’s both more physical in the d-zone and more aware, making better reads. His backchecking has become both more consistent and more ferocious. Essentially he’s raised his defensive game to the same high level he’s had on the attack, and this appears to have given his offensive game a boost, not surprising as he’s winning more pucks, giving him more opportunity to counterattack.

In 2017, McDavid really struggled at even strength, partly because he was mugged by Ryan Kesler in the Anaheim series and partly because Marc-Eduoard Vlasic of San Jose was at the height of his defensive prowess that season and did an excellent job of shutting down McDavid.

In 2017, McDavid made 17 major contributions and 12 major mistakes on Grade A shots at even strength, a per game average of just +0.33 per game.

This year, McDavid is feasting on the L.A. Kings so far. In 48 minutes, he’s made 17 major contributions to Grade A shots for and just two major mistakes on Grade A shots against.

That works to a Grade A plus-minus of +4.7 per game, the best total by far I’ve seen since starting to track this stat.

It also indicates he’s made as many major contributions to Grade A shots at even strength in three games this year as he made in 13 games in 2017.

Of course, three games is an exceedingly small sample size. But McDavid has so far been a tidal wave, swamping the L.A. Kings.

We see McDavid’s improved play at even strength also reflected in his point scoring numbers in that game state.

Draisaitl had 10 even strength points in 13 games in 2017. This year he’s got two in three games. He’s yet to fully rev up his engines at even strength but I expect that will happen.

McDavid isn’t the only Oilers who is crushing it so far in these playoffs at even strength. 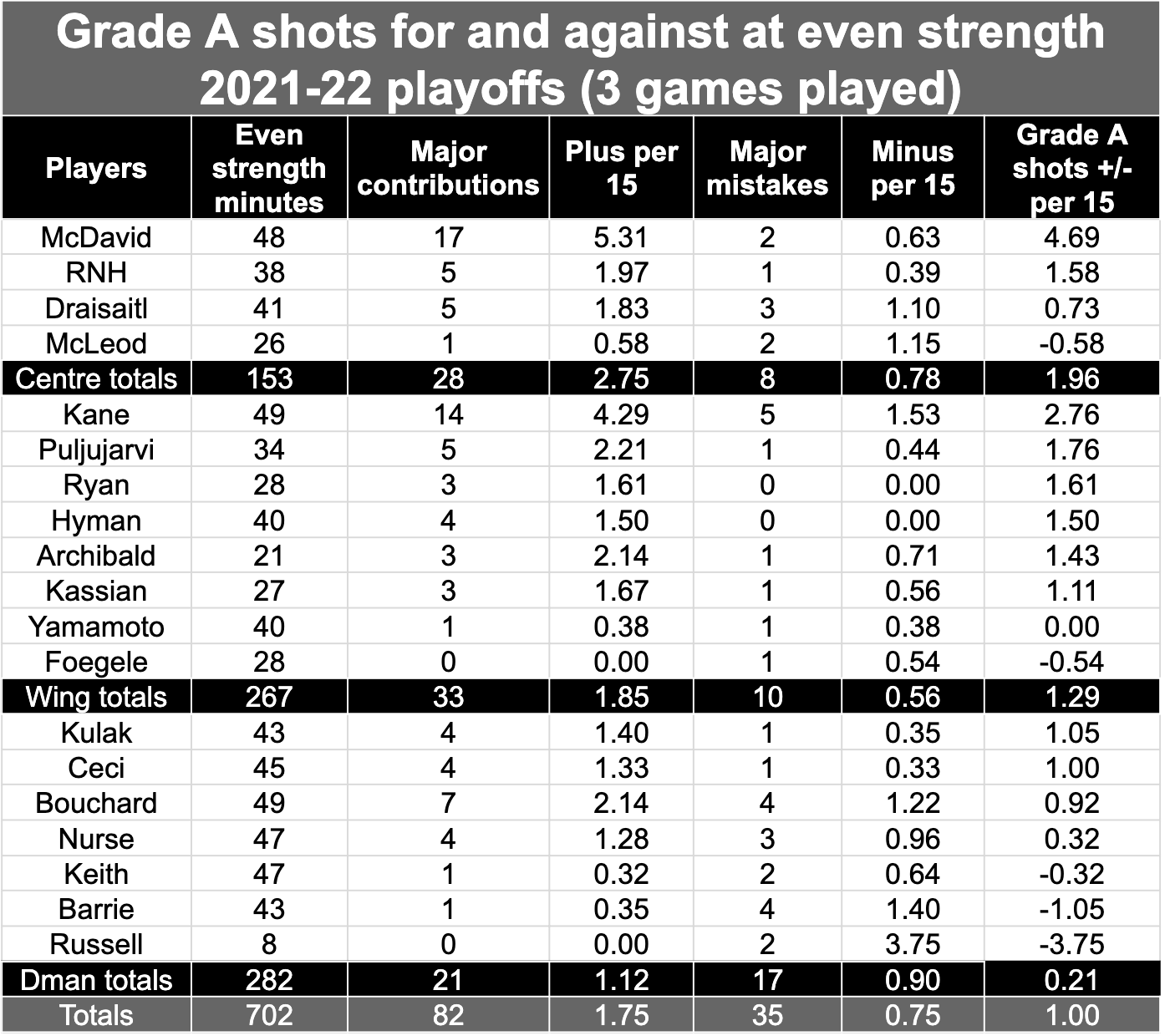 * McCurdy and I started to dig into Grade A shots in 2015-16, McDavid’s first year in the NHL. Since that time, as we have gained more knowledge about what does and doesn’t constitute a Grade A shot and major contributions and mistakes, our definitions have changed somewhat, giving wider latitude in each category. This makes year-to-year comparisons of numbers a bit off, but there’s nonetheless value in doing so, in that the overall Grade A plus-minus per game demonstrates the overall dominance of a player at even strength each year. Tghis indicates, for example, that McDavid was far from dominant in 2017 and utterly dominant this year.

At the Cult of Hockey

LEAVINS: Are these playoffs a window closing or one opening for the Edmonton Oilers organization: 9 Things

McCURDY: The Oilers strike for a gusher of goals in Game 3

LEAVINS: The Oilers roll over the Kings in Game 2

Sign up to receive daily headline news from the Edmonton Journal, a division of Postmedia Network Inc.